Join Mia Baz, Mo Field, Alex Morris, Steve Scott, and Terry Reynolds as they share experiences of exclusion and inclusion within the barbershop as it relates to gender and sexual identity. Viewers will walk away with a deeper understanding of experiences of exclusion that happen within the barbershop community, plus tools and information that will help folks become ambassadors for positive change.

What are people saying about this webinar?

"I signed up for the Inclusion in Barbershop Series: Gender Identity, LGBTQ+ and Barbershop event because this is a topic I'm passionate about. And, of course, I wanted to support the BHS in their pursuit of opening a dialog and educating members on these things. It was SO MUCH MORE MEANINGFUL than I ever could have anticipated! The panelists had insightful stories about their own experiences and ones that had been shared with them. Everyone contributed something important to the conversation, regardless of whether it was telling a story of their own exclusion, finding their place in barbershop, working with and educating others, or discussing the biology of the voice. The attendees of the webinar couldn't see each other, but we all had a lively conversation in the chat, adding our own insights and chiming in to thank the panelists when they said something that spoke to us personally. I'm pansexual (it's the person, not the parts) and it was just wonderful to be part of this conversation where people talked about their own journeys being genderqueer, or gay, a drag queen, or transitioning and finding their identity, and feeling validated and welcomed in this space for this time. There's more work to be done and I think we all know that. Having events like this one will help more people who maybe don't have the personal experience of knowing anyone who fits any of those descriptions, to be exposed to and learn from some of those who do."

"I watched the Inclusion in Barbershop Series: Gender Identity, LGBTQ+ and Barbershop event with my wife and teenage daughter. Normally, I don't ask them to watch too many barbershop events with me, but I told them this was important and asked them to humor me for at least 30 minutes.

In short: they were AMAZED.

Amazed that BHS—an organization they've known to be conservative, slow to change, overwhelmingly centered around white, upper-middle class, heterosexual men—has come so far, so fast. Amazed at the visible love and support for our entire community of LGBTQ singers. Touched at the courage of younger people finding their way through conflicting messages and emerging understanding. Grateful for the voices of older Barbershoppers who have slowly, often painfully, brought about our evolution over decades, not just years.

I'm proud of the entire inclusion effort for its own merits. But on that night, I was proud to show my family who my Society is becoming." 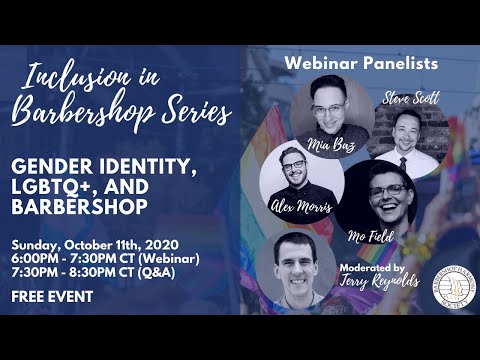 If you would like to make a $5+ donation to support ongoing free content like the Inclusion in Barbershop Series from the Barbershop Harmony Society, you can do that here: http://bit.ly/bhsinclusion