All singers to compete for top honors

Update: The Barbershop Harmony Society Board of Directors continues to review the format of its international contest. A decision about what that format will be going forward will be announced in January, not this month as projected.

“We’re still assessing and solidifying details, and they’re too important to rush,” said Steve Denino, Board vice president and chair of its Strategic Planning Committee, which led the contest review. “The Society Board will vote on a contest format next month.”

An international contest format announced in 2019 included all-male, all-female and mixed categories. In the two years since then, the Board received significant input as equality and gender issues evolved across the nation.

As a result, the Strategic Planning Committee and multiple working groups did an extensive exploration of alternate contest formats over the past six months. Their efforts included interacting with and reviewing feedback from thousands of members across the Society, Denino said. Leaders of all 17 Society districts were invited to survey their members and provide feedback; 14 did.

The decision on which format will be used going forward now rests with the full board.

Dating back to last summer, the team has been reviewing the Contest Expansion Plan first released in December 2019. Extensive discussions with the District Presidents Council and many stakeholder groups have centered on five International Contest Formats being considered by the Society Board of Directors.

The team continues to receive summarized input through this month. The team expects to deliver a recommendation to the Society Board of Directors in early December, with Society Board expected to deliberate and reach a decision before the end of the year.

Watch the verbal report from the Strategic Planning Committee to the Society Board of Directors meeting held November 14, 2021. 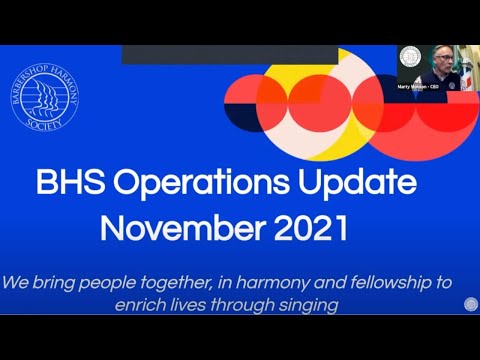 Send questions or comments to societyboard@barbershop.org