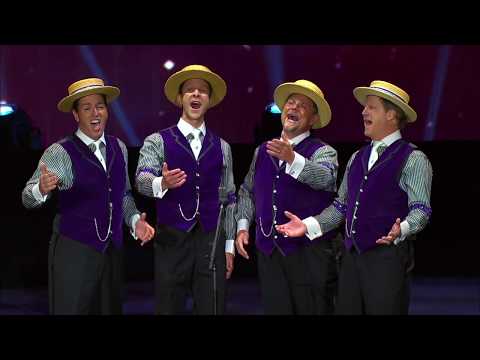 Main Street, a traditionally-styled barbershop quartet based in Orlando, proved there’s still a place for straw hats and arm garters in the upper reaches of a cappella singing, as it captured the 2017 international championship of the Barbershop Harmony Society on Saturday, July 9 in Las Vegas.

Even as the competition brought new sounds and stylish intensity to the contest, the six-time medalists stayed true to their vision of an olde-tyme quartet in the style of the Dapper Dans of Walt Disney World, where all four have sung at various times. Tap dance, hat tricks, and parodies of contemporary pop songs were capped by a tender rendition of the Charlie Chaplin signature piece, “Smile,” in which the quartet thanked its audience for years of support.

The members of Main Street are:

The quartet edged out strong challenges from their colleagues from Florida, Signature, whose passionate performance of Luther Vandross’ “Dance With My Father” was the highest-scoring song of the contest. The top five finishers were:

Barbershop is Coming Back