Related categories: Media • Quartetting • Why I Barbershop • Together, Making The Music That's Making A Difference • Video

Last week, we shared a link on the BHS facebook page that was originally posted by US Airways flight attendant Kari Holsapple Mann. Now it's a week later and we are seeing links to the story and video all over the place! Several news station web sites ran the story and a number of other web sites have featured the video... all mentioning the inspirational power of music. Excellent work, gents!

Flight attendant Kari Mann said her plane, which was headed from Indianapolis to New Orleans, was delayed for maintenance after everyone had boarded on Jan. 7. Mann said she started talking to the passengers and discovered that the quartet was on the plane. Walt Dowling, Fred Moore, Jim Curtis and Jim Simpson began singing, and Mann said passengers began recording the impromptu concert. Mann said she shared her video of the quartet's performance on Facebook as a way to show her thanks to Port City Sound for turning what could have been a negative situation into a positive event. 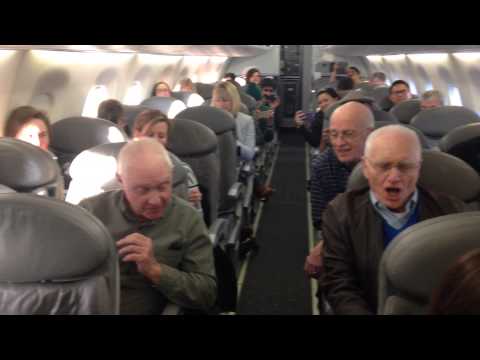