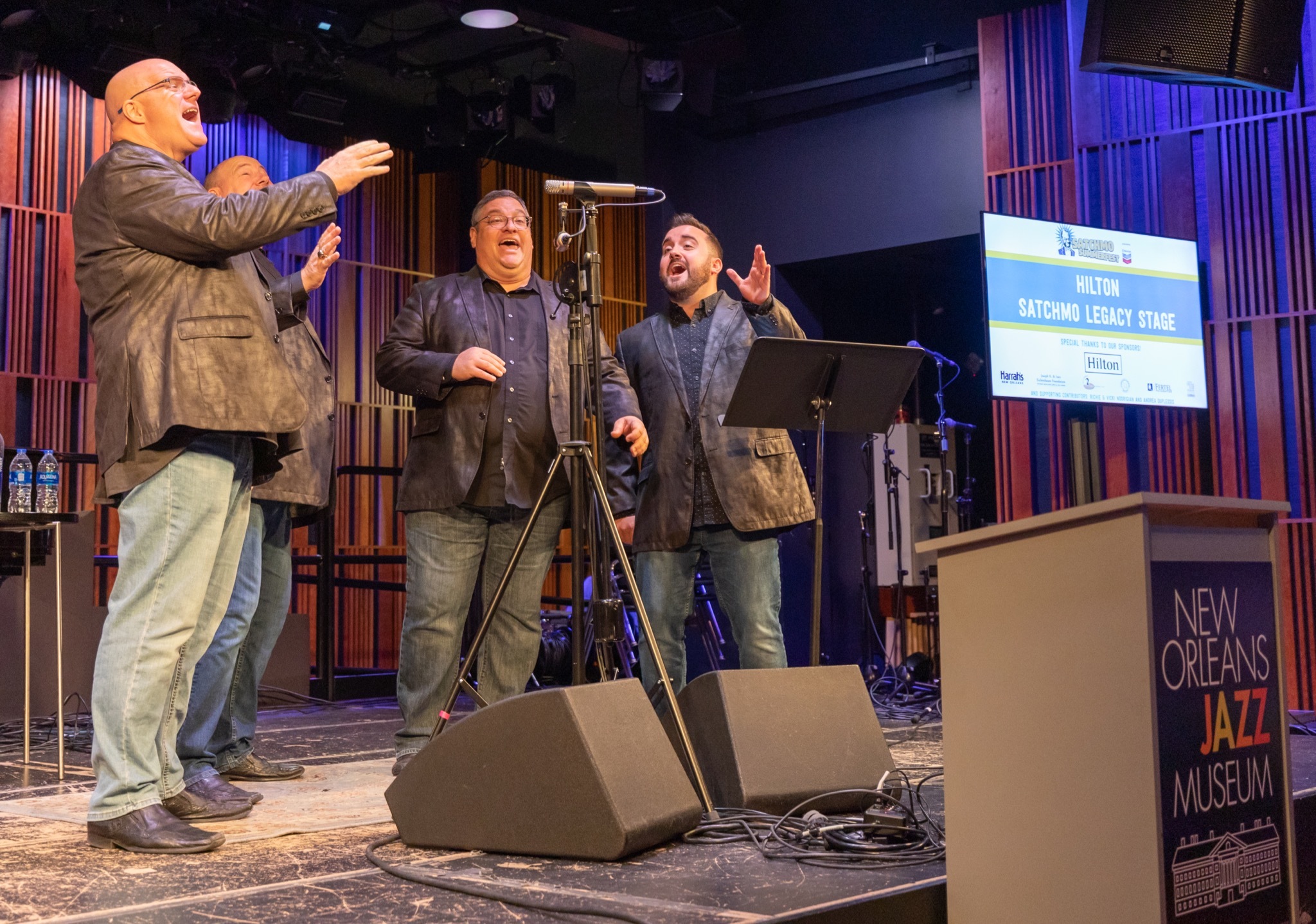 Louis Armstrong repeatedly said that his jazz playing was derived from his early quartet experience. In a lecture/demonstration at the 2019 Satchmo SummerFest in New Orleans, barbershop historian David Wright and jazz historian Vic Hobson demonstrate the ways in which jazz replicates musical devices of barbershop harmonizers.

Barbershoppers aren’t the only people fascinated with the barbershop style. Music historians, jazz enthusiasts, and ethnomusicologists alike have delved into this Americana musical form and connected it with African American communities and in the shared heritage of jazz, blues, and gospel music.

The 2019 Satchmo SummerFest Festival assembled a true “Dream Team” of experts for a “must-hear” presentation. Fans familiar with BHS Historian Dr. David Wright’s classes in barbershop history will recognize some material covered. He was joined by Vic Hobson, whose influential books include Creating Jazz Counterpoint: New Orleans, Barbershop Harmony and the Blues and Creating the Jazz Solo: Louis Armstrong and Barbershop Harmony.

Together, Wright and Hobson led a media-rich exploration of jazz music’s use of harmonic devices derived from improvisational vocal harmony -- like Satchmo had sung in barbershops as a kid. Watch avid Wright & Vic Hobson - Louis Armstrong, New Orleans Jazz, and Barbershop Harmony.

Since audio samples can only take one so far, though, they tapped 2009 champs Crossroads as the demonstration quartet.

Well, not quite Crossroads...

Everyone knows Theo Hicks as one heck of a lead singer, a gold medalist with Instant Classic, 2015 champs. He’s also a quick study, it turns out. When Crossroads baritone Brandon Guyton was hospitalized in New Orleans with a mysterious high fever, the quartet reached out to Theo the night before the gig at 8:30 pm, and Theo was on a plane at 5:30 AM the next morning. “I crammed in some music study in on the plane ride,” said Theo, “I landed at 9:30 AM in New Orleans, ran through the songs with them, and away we went!”

The results speak for themself. Watch the 45-minute concert set that followed the historical lecture.

Festival organizers were effusive in their praise: “The Crossroads performance was unlike anything we've provided to festival attendees in the past and it was a huge hit! Your set was in the top 3 highest attended presentations on the Satchmo Legacy Stage throughout the whole weekend.”