What you never knew about the first convention and quartet contest

The first convention [Tulsa, Oklahoma] was meticulously planned out by OC Cash. Always the showman, Cash had crafted an agenda of events that included a business session, luncheon and – of course – the quartet competition. In the program, Cash wrote this about the registration process on the Mezzanine floor: “Barber Shoppers will be vaccinated, ear-tagged and tattooed so they can be returned to the herd if lost, strayed or stolen”. The cost of registration was “a mere $3.00”, which covered the cost of the “Official Songbook”, badge, luncheon and dinners”.

Among the competitors at that convention were the Capitol City Four from Canton, IL. Folklore has it that on the first day of the convention, the quartet entered the lobby of the Hotel Tulsa – the headquarters hotel - and “were overwhelmed by the singing of the Flat Foot Four” (1940 champs) who were there performing.

The first qualifying rounds took place on Friday afternoon at 2:30 p.m with quartets being scheduled “as they arrived” that afternoon. The second round of qualifying took place on Saturday morning at 8:00 a.m. Cash wrote in the program, “Those who blew a tonsil or made it to the finals can play golf, if they want to waste their time that way. The more serious artists will serenade the townsfolk from pillar to post”. The “Grand Finals” for the “World’s Championship Barber Shop Quartet” were held Saturday evening at 7:30 p.m.

Being the first contest, there were very few rules. The ones that were observed included: “Competition restricted to Quartets (male) with or without accompaniment; “Each quartet will be permitted to sing two numbers of own choosing in qualifying and final rounds”; and finally “Quartets will be known to the judges by number only”. Speaking of judges, there were none who would qualify as a judge today. The panel included a doctor, the Lieutenant Governor, an American Legion commander and several local educators.

Of course, the contest was won by the Bartlesville Barflies singing such tunes as “By the Light of the Silvery Moon” and “Just a Dream of You”. 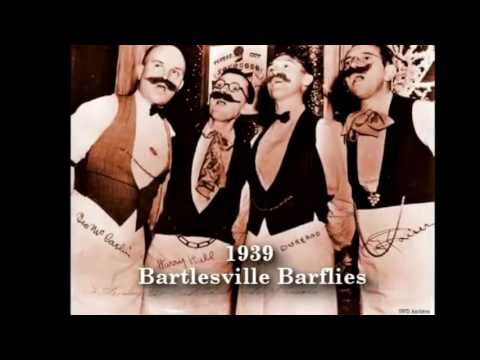 Incidentally, the second-place quartet at the contest was the Capitol City Four – the quartet that was so awed by the Flat Foot Four the prior day! As the third-place quartet, the Flat Foot Four were awarded a “Consolation Title”, and a “commission to each member as “Little Colonel””, another brilliant piece of prose by founder OC Cash. By the way, Cash didn’t forget about the other competitors. The “Also Rans” were awarded “A box of throat lozenges and best wishes for the next convention”.

The contest – and the publicity it garnered – created an instant hit for the young society and by early 1940, new chapters were springing up across the country.