Barbershop harmony may have emerged from the music of late 19th Century African-Americans, but if you told anyone—even 10 years ago—that a possible watershed moment in the 81-year history of the Barbershop Harmony Society would take place on the campus of an historically black college, some would’ve called you crazy. Yet, here we are, on the campus of North Carolina Central University in Durham. 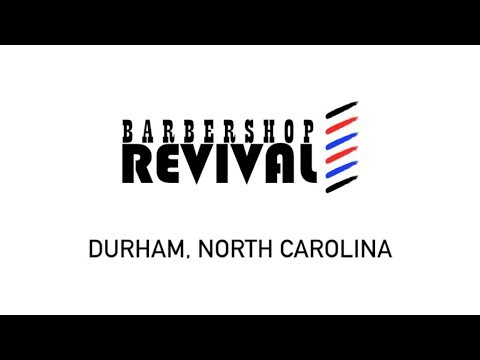 In the 36 hours of Barbershop Revival this March, expert clinicians Dr. Jim Henry, Debbie Cleveland, and Dr. Bill Adams guided the collegiate singers through a barbershop whirlwind. Topics included the similarities between southern gospel and barbershop and the African-American roots of our art form. They also prepared the singers to perform on the Saturday Night Show finale.

Attendee Isaiah Mudd had arrived without preconceptions. “I didn’t want to set my expectations too high or too low,” the college senior said. “This is an art form that I’m not used to at all, but I was completely blown away!” He was part of more than a concert weekend. Barbershop Revival was a cornerpiece to a social movement puzzle assembled by passionate Barbershoppers (and spouses) Warren and Andy Fuson, as well as Dr. Bill Adams, funded in part through BHS grants provided by Harmony Foundation International, and inspired by the Society’s strategic vision of Everyone in Harmony.

The Fusons had attended a lecture by Dr. David Wright that featured a video produced by Harmony Foundation— and it resonated strongly with them. In the video, educator Douglas Carnes spoke about his inner city students' reaction to seeing a barbershop performance as part of a class discussion. “One of the young men said, ‘Why are there no black people?’ Doug said, ‘I don’t know,’” Andy explained. “In that instant, I knew this was something I could do something about. I didn’t know how, but it was going to happen.”

It took two years of trial and error to get Revival off the ground. “It took us a while to figure out how to start a conversation with the African-American musical community without sounding condescending and without seeming like we were coming in just trying to help out, which is not productive,” Warren recalled. “But once people realized that we were sincere, the door was open.”

It can be tough building partnerships with musicians who don’t yet share the same passion for the barbershop art form, especially within an education system that has so many existing demands among people and groups. But the Fusons were determined to tear down stereotypes and build bridges. Once they found Roberta A. Laws, Choir Director at North Carolina Central—she so wanted her students to take part that she made Barbershop Revival mandatory—they were on their way.

“I wanted my students to grow in the knowledge of African-American history," she said. “I wanted to expose them to a genre of music they knew nothing about and had never performed.”

Dr. Jim Henry led an hour-long master class for the ages, with Crossroads illustrating a song (or a part of a song) and then The Fairfield Four showing a comparison segment, demonstrating the evolution of barbershop from the southern gospel style. Jim educated, Crossroads rang chords, and The Fairfield Four took the room to church. Everybody in attendance had their ears—and souls— filled by the time it was over.

The women then left with Cleveland and the men with Adams to prepare for the finale concert the following night. A camp clinician for decades, Cleveland is no stranger to teaching barbershop to the uninitiated. “The challenge is always to share just enough explanation and background to enhance the performance without overloading them,” she said. “I always ask myself, ‘What do they absolutely need to know?’ and then try to mix it all in together with the rehearsal of the music so they can stay actively involved.”

With HALO as section leaders, the group prepared to perform, “Java Jive” and “Ain’t that Good News.” Down the hall, Adams and Crossroads prepared
the men for “Caroline” and “Swing Low, Sweet Chariot,” which would include a solo by Mudd. The senior was quick to point out the elite singing quality of the guest groups. “I’m hearing things that I only really imagined when I listen to music,” Mudd said. “It’s cool to hear those harmonies and actually be a part of that.”

The second and final day saw more rehearsals and a panel discussion and Q&A with HALO and The Fairfield Four, where attendees could pick the brains of the panel members. As the two groups shared their thoughts, insights and opinions on all things culture, music, and barbershop, they were an example of not only racial and gender diversity but a pristine example of intergenerational singing.

HALO bari Niambi Powell left the discussion impressed with the students’ buy-in to the music. “We were just really encouraged,” she said. “Our mission is to help communities come together, help them have difficult conversations and join together in song. It’s a worthy mission. This weekend was proof that it’s happening.”

Members of GQ likewise came away impressed. “HALO led an amazing discussion about how each barbershop voice part relates to helping people overcome deep issues like racism,” Katie Macdonald, the bass of GQ, said. “They were captivating in their explanations and relating our loved hobby to difficult life discussions. It’s beyond important to have these discussions in order to constantly move toward a bigger, more diversely integrated and positively impacted world of harmony.”

A final round of rehearsals and then it was show time. Harmony Foundation International’s Rick Taylor emceed the final concert, featuring all the teaching groups. Standing ovations abounded, especially for the students’ combined chorus performing a barbershop rendition of “Sing” by Pentatonix, followed by “Come What May” from Moulin Rouge. “I know what wonderful musicians my students are and how they step up to the plate when challenged musically,” Laws said. “In every area, they exceeded my expectations. They opened themselves up to a new genre of music, they experienced new learning techniques and they performed with excellence.”

There were plenty of takeaways for everyone involved but perhaps the most valuable was the reaction—and acceptance—of the barbershop art form to the students themselves. “Some seemed a little unsure coming in,” Cleveland said. “But by the second day they were performing the group songs with gusto and even singing tags during breaks.”

Powell agreed. “To just throw themselves into a style and into a vocal musical relationship with strangers in an unfamiliar genre without fear?” the HALO baritone said. “They were open to the process and they were gracious with each other and with the music. I was so touched by that.”

“It was such an amazing and diverse group of singers,” Macdonald added. “Everyone benefited from seeing each other’s different styles and perspectives. It was inspiring to know that the Barbershop Harmony Society was so supportive of such a needed diversity initiative.”

BHS is supportive of the efforts, indeed, but all credit for Barbershop Revival goes to Warren and Andy Fuson—a husband and wife team who felt compelled enough to spend two years planning and executing a fantastic event with the hopes that it could change lives in a relatively untapped community—and Dr. Bill Adams, who spearheaded the entire musical side of the weekend, including choosing the repertoire as well as the other clinicians.

“Both Andy and I have been struck with the terrible need for inclusion,” Warren said. “The wrongs that were done to the African American culture over the years and the incredibly rich heritage that we have isolated ourselves from as well as just the conversation between the races. This has been an opportunity for us to get actively involved in that and do our small part to address the cultural divide.”

Without question, the event was a success—a success to the point where the Fusons believe others should try similar events where they live. “An outreach like this is possible, in some fashion, in any district,” Andy said. “All you have to do is pinpoint the person and institution who would have the same goals that you have.”

In short, it takes a village. And the first village was built on the campus of North Carolina Central University.