For Geno: Walking All the Way Through

I ran into Gene Cokeroft on the streets of Pittsburgh on a warm Wednesday night in 2015, shortly after Signature quartet had been announced as a Semifinalist in its International debut. This 79-year-old iconic tenor of 1961 champ The Suntones had been coach, mentor, muse, and inspiration for these four young men from the beginning. We celebrated their successful Semifinals berth a bit, and then Gene’s face became solemn. “Gipp, I'm not feeling well,” he said hauntingly. “Need you to walk the boys through.”

This 79-year-old iconic tenor of 1961 champ The Suntones had been coach, mentor, muse, and inspiration for these four young men from the beginning. We celebrated their successful Semifinals berth a bit, and then Gene’s face became solemn. “Gipp, I'm not feeling well,” he said hauntingly. “Need you to walk the boys through.”

I was surprised but honored to fill in the following day, especially knowing that Gene had been close to some of “the boys” since their teens. (Nobody did youth outreach quite like “Geno.”) In fact, the Cokeroft kitchen had hosted Signature’s first gathering in October 2013. They were looking for affirmation that this quartet had enough of “the right stuff.” The Hall of Famer turned to his wife, Iris—a quartet champ and legend in her own right—and definitively proclaimed, “These walls haven’t heard chords like this in a long, long time!”

I wouldn’t let Gene down. “Honored to take them through the second round pattern,” I replied. Gene then became gravely serious and looked me square in the eye. “I may need you to walk them all the way through,” he corrected me. Only weeks later did I truly understand.

Though he’d kept it quiet at the time, Gene spent the next two days in a Pittsburgh hospital before returning home to Florida—his cancer still a secret to nearly everyone. Three weeks later, an aneurism took his life. His loss was huge to the barbershop world, and devastating to “the boys” and to me. The best honor we could give Gene was to finish what he started.

Friendship is at Signature’s core. Paul Saca (T), Daniel Cochran (L), and Will Rodriguez (Br) have been friends for 20+ years.

Paul and Will (and Will’s future wife Gisela) sang together in the choirs of South Miami High School under director Christine De La Rosa. Daniel attended Forest Hill High School further north in Palm Beach, where choir director Elizabeth Phillips and mentor Harold Bradley recognized and helped develop his one-in-a-million talent from an early age. All three were at the vanguard of South Florida’s vibrant youth barbershop scene, and Gene was front and center in outreach efforts.

Gene formed, directed, and took the Young Miamians to the inaugural Youth Chorus Festival in 2008. This group would become The HD Chorus in 2010 under the direction of Alex Rubin, baritone of 2019 silver medalist Throwback and a close friend who coached Signature during its first few years.

A shocking number of future Next Generation and International medalists sang with that small chorus over its five-year run.

Will has always been the quartet’s catalyst; he had the idea to form a dream team quartet with Daniel as lead and himself as tenor. They had a great bari in Matt Clancy living only two hours away, but they reached all the way to South Carolina to find the incredible bass pipes of Dan Walz, who had recently sung with Will in NSC quartet 1/2 Ton Pickup.

From day one, Signature had a sound that could fill the Grand Canyon, but in all my decades of coaching I’ve never seen a quartet with a more unyielding work ethic to build upon that foundation. For example, early on Dan would drive thousands of miles for rehearsals. Once all four were in Florida, they committed to rehearse together every Wednesday and Sunday they did not have a show. Either Matt or the trio made the 244-mile roundtrip twice a week for years.

When it became clear in 2018 that Matt needed to bow out from the intense schedule (they remain great friends), the quartet turned to their old friend Paul Saca … a tenor. A voice part shake-up seemed worth it, because with Paul they wouldn’t lose a step in commitment, talent, or personal chemistry—and Paul even lived nearby in Miami. That last advantage was short-lived, after Daniel was blessed with singing commitments at Disney Orlando from October through December of 2018—now a 470-mile round trip from Miami. The quartet still did trios twice a week, adding Daniel whenever time permitted, and would FaceTime with coaches even if only as a trio. Ask me or Theo Hicks or Kohl Kitzmiller how consistent they were— they simply did not miss sessions.

Even outside of rehearsal, there may be no other quartet that puts as much time into finding the right songs and in revising arrangements until they are perfect. The quartet’s emphasis on detailed planning and high personal accountability was critical to success in Salt Lake City, with Paul new at tenor and Will switching to bari. Will is now the only champion to win silver on one voice part and then earn gold on another voice part one year later.

THE MOMENT EVERYTHING CHANGED...

Signature in Pittsburgh had been only a small taste of the breakthrough we would see in 2016. In Nashville, Daniel opened Signature’s Quarterfinals round with a brilliant, soulful solo from a Sam Cooke anthem: “I was booooooorn by a river …” drawing gasps and cheers. Those six words heralded a new quartet identity and a new chapter in barbershop history. Six songs later, the barbershop world was in love with one of our most talented and original leads ever, while Signature channelled powerful themes from ethnically and culturally diverse songwriters—songs that had never before graced our stages. “A Change Is Gonna Come” indeed! 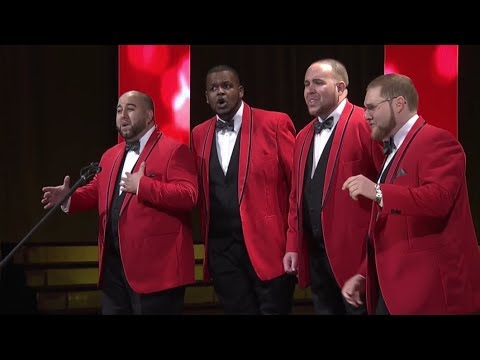 That moment also marked the arrival of an inspiring new arranger: Patrick McAlexander—“P-Mac,” who penned both “A Change is Gonna Come” and “Somebody To Love”— and of Signature’s now trademark red suede shoes and jackets.

…AND A MOMENT THAT WON’T BE FORGOTTEN

Many who saw Signature’s performance of “Dance With My Father” the next year in Las Vegas called it “life-changing.” Now imagine what it was like to perform it. Months earlier, the quartet had instinctively known that Daniel would wrap his heart and soul around the Grammy-winning song based on Luther Vandross’ own childhood. When Daniel embraces a musical mission, he goes all in, and a song soon becomes a quartet ministry.

They chose Theo Hicks to arrange the song for them. “I would send something their way, and they would respond quickly with other ideas, thoughts, and dreams for their vision ... we would go back and forth until we were all sure we had found the right choice,” Theo said. “With how versatile their voices are already, it was a broad palette to work with!” 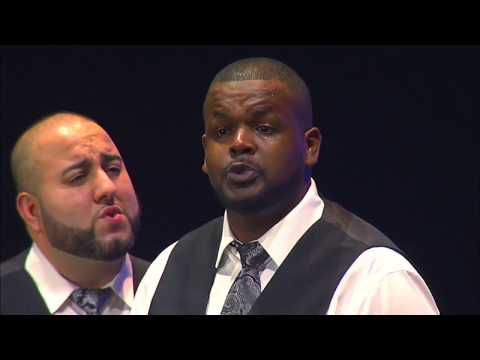 Everywhere Signature performs, the men are asked to relay stories about their fathers. The reality is that unlike Vandross, the quartet sang this song for their mothers. (“I pray for her even more than me …”) This and other themes came into focus during a session with Brandon Guyton (baritone for 2002 champion Four Voices and 2009 champion Crossroads), a Sunday afternoon in Fort Worth that the quartet and I considered almost a spiritual experience.

After the Vegas performance, I know at least four lives that were never the same. When Daniel broke down to tears in heartfelt weeping, Will consoled him while the bass clef stood in support knowing they would have to flawlessly recover. Dan would need to hit a low B-natural once Daniel rejoined. Together, they had bared their souls and rejoiced.

A Legend "Gone Too Soon"

Singing in Orlando in 2018 focused the quartet on developing a tribute to their friend and mentor, “Geno,” in the district he built. They chose the iconic Michael Jackson piece “Gone Too Soon,” again with Theo Hicks as arranger. The run-up to Orlando began an intensified musical mentorship with Tony De Rosa. They also chose another pre-Pittsburgh mentor, four-time gold medalist Joe Connelly, to help them bring this musical message to life. Joe’s genius added Gene’s iconic “Danny Boy” melodic refrain to the end of the tag. 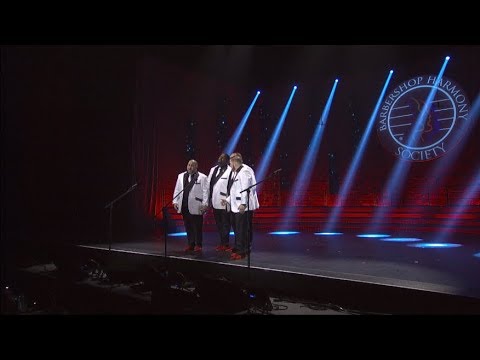 Because Signature sang as the tenth performer in the Finals, the last notes heard in the contest were “I love you so.” It simply doesn’t get any better.

THE WALK OF A CHAMPION

While their all-star coaching team had already positioned the quartet for its best performances ever, the quartet wanted to rise to yet another level in Salt Lake City, as well as finally show off its fun side. Enter the legendary maker of champions, Jean Barford.

In daily on-site coaching sessions, Jean and her husband, Brian, tweaked, fine-tuned, and mentally prepared the quartet to own the stage and fully deliver in real-time. Jean’s contagious championship attitude exhorted the men to know they had “already won.”

Anyone who saw the quartet throughout the week saw the difference: the walk of a champion. P-Mac arranged Aretha Franklin’s “THINK / R-E-S-P-E-C-T” classic to open the contest, while Theo contributed epic ballads in each set. But the fun side would come via Kohl Kitzmiller, whose “Blame It On The Boogie” for the Semifinals and “Proud Mary” for the Finals were just what the doctor ordered.

And maybe a doctor should have been ordered by Dan Walz, who broke a toe during the Semifinals and “Blames it On The Boogie.” He iced it, taped it, and performed “Proud Mary” in the Finals while most were none the wiser.

The only thing that exceeds this quartet’s love of singing is love for their families, including their Sunshine District family. It is for this reason they always “go home” in preparation for major events. They willingly make the trip to South Florida to receive Iris’ input and stamp of approval on upcoming performances. They seek the counsel of their coaches and trusted advisors in the circle. This extended family provides unconditional love.

On that night in Pittsburgh, Gene thought he was permanently passing me the baton; but in a sense he never let go of it. Every time this quartet enters a stage with that quiet confidence of men exquisitely prepared to connect with an audience, I see Gene. Whenever I see them actively seek out opportunities to give younger singers their undivided time, attention, and encouragement, that’s when I really see Gene.

And finally, every time I see “the boys” huddle up and pray backstage before a performance and then chant, “1-2-3 Geno!” I know that they see Gene, too.

George Gipp is a performance coach, judge, educator and champion competitor, working with groups worldwide to discover their identity and “BE.” His influence spans decades.

This article originally appeared in the 2020 May/June issue of The Harmonizer.